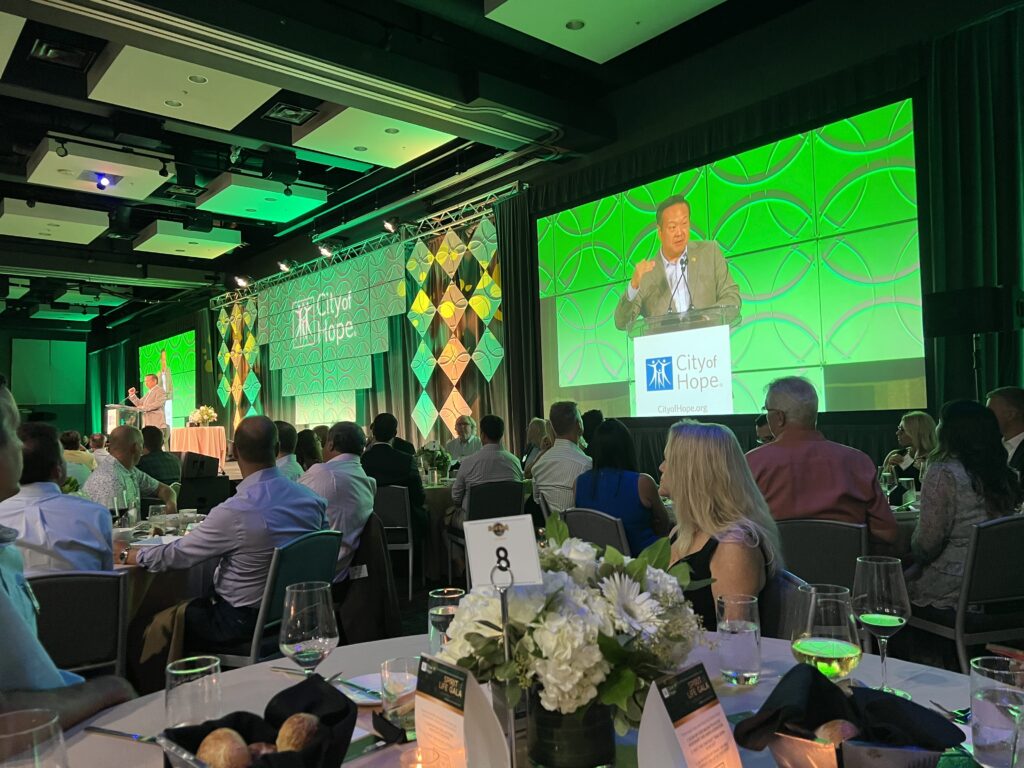 Paul Patterson along with Sandi Grigg from The Hartford Insurance invited my wife and I from Alta Vista Insurance along with our friends Brandon and Justina Strausbaugh from Pauma Valley Insurance to the 2022 City of Hope Gala.

The Spirit of Life® Award is City of Hope’s most prestigious honor, presented to an esteemed community of industry leaders around the world who have made a significant commitment to support those in need. Honorees are selected for their notable contributions to the community in which they live and the profession in which they work. This year, the National Insurance Industry Council (NIIC) honors Joel Cavaness, President, Risk Placement Services.

We were able to “Rise our paddle” for Lung Cancer Research performed at City of Hope and raise hundreds of thousands of dollars. Truly a special evening, for a very special cause. 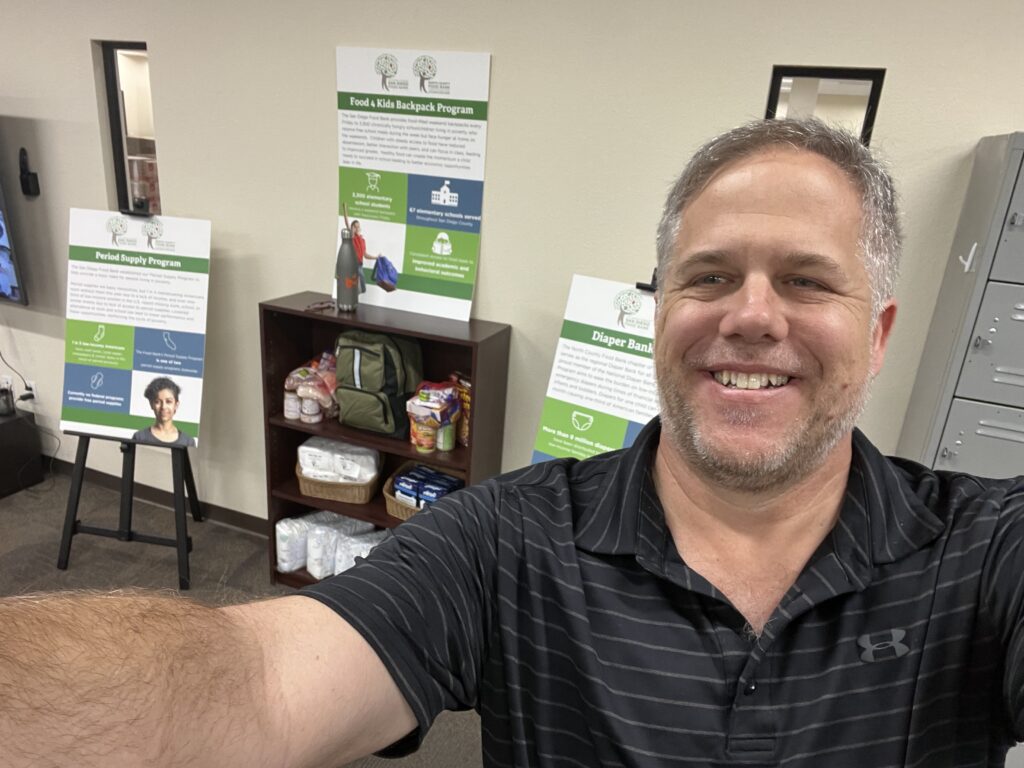 We are back at it again!

Last Friday, September 9th, 2022 we shut down the office early at noon to go help our community by volunteering at the North County San Diego Food Bank again! We had a ton of fun back in June helping put together meals for those with food insecurity here in Vista, San Marcos, Escondido, that we decided to come back for round 2 and put together over 500 meals for students at risk from Valley Elementary in Poway and Cesar Chavez from San Diego Unified.

How was it George? He was perspiring, or as Geo likes to say; “perspering” The whole team with Vira Rodriguez, commercial lines account manager, Sandi Grigg – The Hartford Insurance, and George Francis all were “perspiring” after assembling more than 500 meals for youth in our community. Holly Bishop didn’t want to be on camera! But here are are few video clips from our adventure!

Also, we got Natalie, our Food Bank Volunteer Coordinator to smile “ear to ear” in her own words with all the work we did to help feed our community in North San Diego County Food Bank! The schools we Valley Elementary in Poway, and Cesar Chavez for San Diego Unified School District. 300 and change, and we did two orders of 500 each (so 1,000 meals to food insecure kid-o’s here in our community) Watch the clip here.

Thank you to everyone that came out for the event. We will do something else fun and of service some time late in 2022. Until then, stay safe, stay well, and have a great fall season!

Pacific Plastics was also on scene to serve! We were excited to give back to the community with them too. If you need injection molding here in Vista, they are your ticket! Fun folks, that know how to work the line!

We were excited to take a little trip to Beach Break Cafe Where we had lunch with Sandi Grigg, our carrier partner representative from The Hartford Insurance. We met to break bread and discuss business!

The food is really good at Beach Break Cafe. The coffee cake is home made, and really a special treat, I highly recommend it with any breakfast or lunch menu item, or just with a good cup of coffee. The portions are too big, even for me. I’m 6’5″ and 280 pounds!

For breakfast, if you like mexican food, I like the Huevos Rancheros with corn tortillias or the Chili Verde burrito (with extra verde sauce on the side!) and you won’t be disappointed with true Cali-mex style San Diego beach food.

The Hartford insures restaurants like Beach Break, and has competitive rates for workers compensation, general liability (slip and fall), and commercial property for your businesses building.

Gary and Zell started Beach Break Cafe as a great local go to spot after surfing, fire fighting, or just a great place to meet with your friends and family down by the beach. The Beach Break is now in the 2nd generation of family ownership! 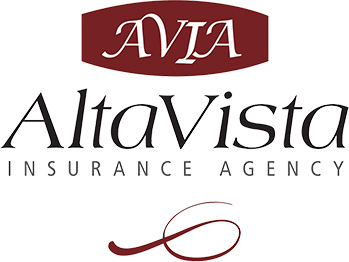 Back in the day, while taking an auto insurance application by phone, I asked a client if his wife was employed? He said no, and she said, ” YES I AM!” (this is dating myself, it was back when Roseanne Barr was doing her stand up.) The wife says, “I’m a DOMESTIC GODDESS!” We all laughed, and then she said. “Put that on the application.” So I did, marked her as employed, and moved on. I really didn’t think twice about it.

A few days later, an underwriting associate at the firm I was with came over to my section, and with their boss, and my boss, and my bosses boss and they kept looking at me while I was on another sales call. Finally my boss came over, and said to not take another call. Needless to say, I finished the call sweating bullets, wondering what could have happened that 1/2 the management team was in my section waiting for me?!

Turns out “Domestic Goddess” is not a job, and cannot go onto an auto insurance application.  Who knew?

EDIT: This was decades before Roseanne Barr was cancelled from ABC for being a racist. 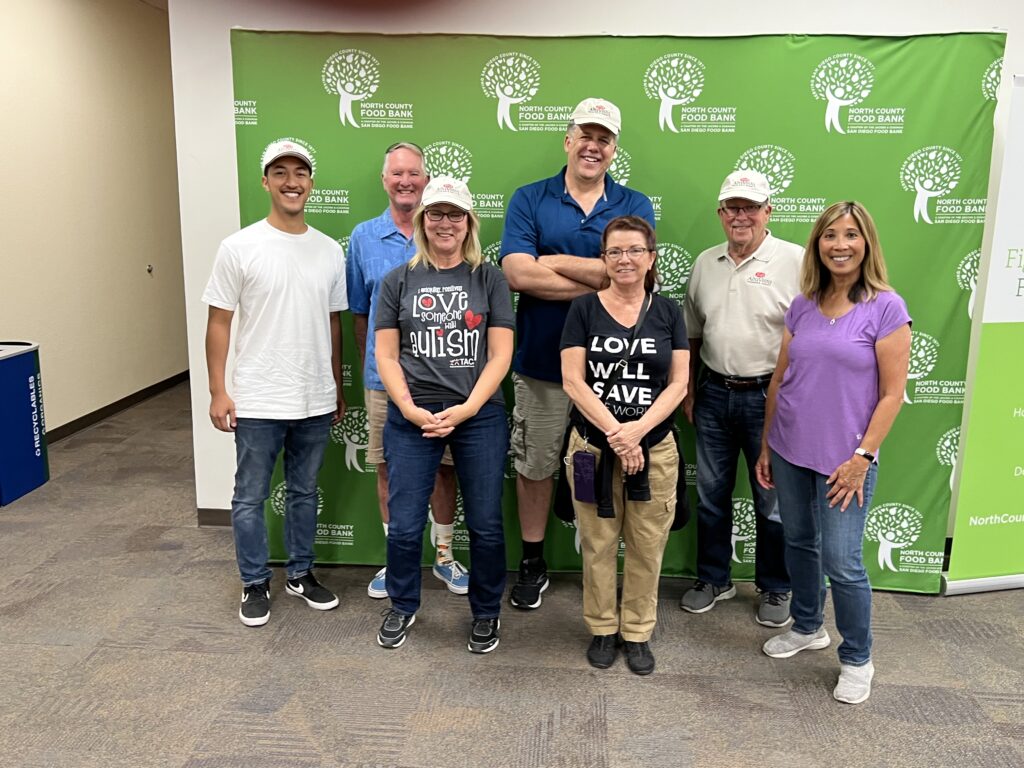 I wanted to share with you the great group of people I am blessed to work with. Did you know the San Diego Food Bank also has a North County location? The North County location serves over 10,000 families facing hunger in Vista, Oceanside, San Marcos, Escondido, Carlsbad and through out San Diego in need monthly with quality meals. We were excited to help our community!

Our agency had a great time and a lot of fun on our recent community service project! We were happy to volunteer over 32 hours of our time today to help a great cause here in our community. During that time we moved over a thousand pounds of plums into five pound bags for distribution to those in need.

In addition to that, the North County location also servers as the Diaper bank for San Diego. Many young working moms are in need of diapers to send with their kids to day care to be able to get back into the workforce to make a difference. We at Alta Vista were excited to donate dozens of diapers, as well as our time this week! With 3 kids of my own (thankfully all out of diapers!) I know how expensive it can be to have kids in day care and keep them fed and in diapers. Here is the link if you would like to donate to this valuable community resource. 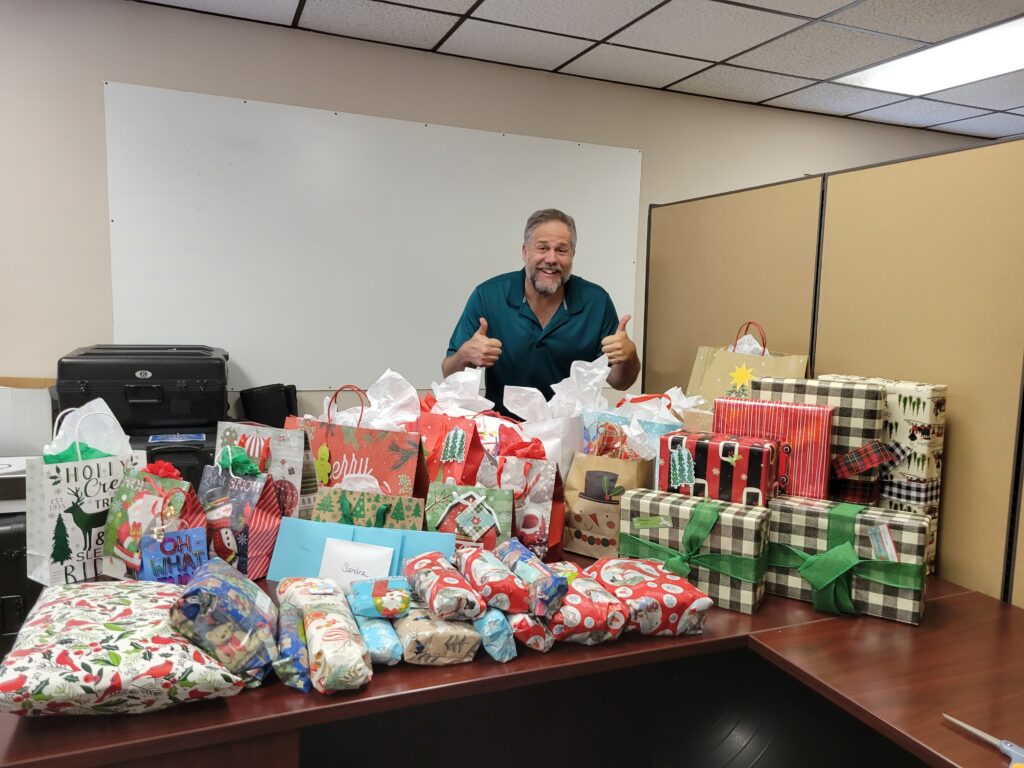 It was fun for everyone to support a local vista family in need for Christmas this year! For the past several years it’s been our pleasure to support a local family through the Vista Boy’s and Girls Club. We hope our our clients, friends and family enjoy this Christmas season. God Bless Us Everyone! ~ Morgan 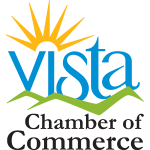 During these difficult times, we are proud to sponsor our community and members of the local Vista Chamber of Commerce here in Vista.

With COVID-19, and the stay at home order, the Chamber is offering virtual coffee and conversation events.

Several of our agents have been Vista Chamber Ambassadors in the past, and as we start getting back to business, we look forward to supporting our community in this capacity again! 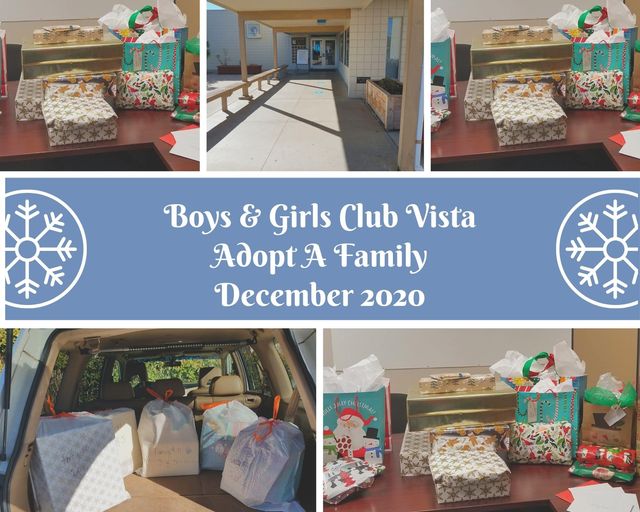 This year has been filled with many ups and downs and uncertainties. But one virtue has remained a beacon of hope, kindness. One simple gesture can change the course for any person. I’m overwhelmed and amazed at our support for such a great cause during this difficult time. Our agency staff rallied together to make a difference for a couple local families through our support of the Boys & Girls Club of Vista’s Adopt a Family Program! Santa delivered a sleigh filled with toys and presents today for the families to put a smile on everyone’s face during the holiday season. Thank you to my AVIA family for making a difference in someone’s life and creating positive change for our community.

Labor day marks the end of summer and usually the return to school. But here in California it also means the beginning of fire season. Sadly, this year is no exception with over 1.2 million acres burned so far this year nationwide.

Here in San Diego is the Valley Fire near Alpine having burned 17,665 acres as of 9/10/2020. (For more recent updates check the Cal Fire website https://www.fire.ca.gov/incidents/

What does this mean for insuring my property? Many insurance carriers are on new business binding moratorium. Meaning they have closed zip codes where there are active fires. If you are shopping for home insurance, or in escrow and trying to close, this can mean delays in the transaction process.

How else should I prepare? Consider making sure your policy protection is up to date. Standard homeowners insurance policies cover fire and your contents, but more and more frequently we are seeing the standard carriers declining homes for brush. Luckily there is a program set up through the state called the California Fair Plan. However, California Fair Plan policy only covers the structure for fire, and does not provide liability, loss of use, or contents coverage. For that you will need another policy called a “Difference in Conditions” or DIC policy. With the two policies together, you have similar coverage to a normal homeowners policy.

What Are My Next Steps? To learn more about insuring your home in California start by comparing home insurance quotes on our website. If you would prefer to speak to a licensed insurance guide; book an online appointment with one of our agents.

According to an article from Property Casualty 360, the amount of rain or snow falling from the top 1% of intense storms has increased in every region. Add to that the problem of antiquated infrastructures and sewer systems plus overbuilding and dwindling wet spaces, and the threat of flooding can affect anyone, anywhere. From 2008 to 2012, the average residential flood claim amounted to more than $38,000, according to the National Flood Insurance Program (NFIP). Yet most consumers don’t know what they can do to protect their homes and belongings against a flood event. Top misconceptions about Flood insurance

Haven’t you been watching in the news about random flooding in places like Arizona and Nevada? Standard NFIP policies cover damage from overflow of inland or tidal water, unusual and rapid accumulation or runoff of surface waters from any source, and mid flow.

NFIP can provide coverage available to any homeowner, regardless of their location, through two separate client segments: standard and preferred (B, C and X zones), and high-risk locations (A and V zones). Carmody estimates that 25% of all flood claims come from preferred or standard locations.

In the deluge of claims following Super-storm Sandy, many policyholders did not know that their homeowners’ coverage did not include flood. Let Alta Vista Insurance Agency walk you through the process of how a flood policy works. Although the standard homeowners’ policy does not cover overflow of inland or tidal waters, it does include coverage for damage from cracked pipes or other internal systems failure, he says. Additionally, sewer backup coverage is available by endorsement. See? There aren’t any more excuses to avoid flood insurance. Call us (888)724-2124 and we can work up a quote in minutes.